Grit your teeth and struggle through. Is this the key to happy relationships?

This may have escaped popular notice, but last week was national marriage week, a celebration of an enduring if seldom untroubled institution. By coincidence or not, several studies were also published that shed light on the state of the nation’s relationships. The first thing to note is that marriage is a diminishing part of cohabitation. Some 6 million people live together in relationships that have not been certified by a church or registry office. That’s double the number of 30 years go.

Like so much else in British society, marriage does not manage to escape the clutches of class. Among parents, close to 90% of the wealthiest sector of society get married, while the figure is less than a quarter among the poorest. The divorce rate, however, is falling, having reached a peak in the 1980s. 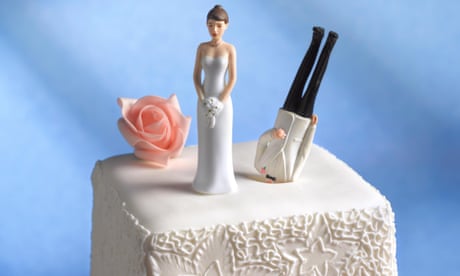 Modern divorce: the new rules of splitting up

The end of the summer holidays is a peak period for marriage breakups. But now couples are looking for fast and amicable ways to avoid being mired in the blame game, will the law finally catch up?
Read more

According to one survey, produced by the Marriage Foundation, around seven out of 10 unhappy parents grit their teeth and stay together – and of these, almost seven out of 10 report being happy 10 years on, with 27% saying they were “extremely happy”.

In other words, it’s worth getting through the tough times to reach the sunny uplands of marital or cohabiting contentment – although married couples with children are much more likely to do the teeth-gritting than those not married. In line with current trends, a child born today has a 50-50 chance of living with both parents by the age of 15 – and in more than 90% of those cases the parents will be married.

But marriage is not necessarily always the answer. Another study, produced by the Journal of Women’s Health, found that postmenopausal women who get divorced tend to be healthier, in terms of diet, than those who stay in their relationship, and significantly healthier than those who were single and then undertake a postmenopausal marriage. For middle-aged men, though, divorce is more likely to lead to health and social problems, including depression. As Pam Custers, a relationship psychotherapist in south-west London, says: “Whereas women more often have an ability to set up a social network that provides them with emotional succour, men tend to have put an enormous effort into their careers and become rapidly isolated post divorce.”

So what is the secret of staying together? For Julia Crabtree, who counsels couples with relationship and sexual issues, the biggest problem is communication. “People come with all sorts of problems but common to most of them is that they’re not listening to one another or they can’t express what it is they want.”

When they do express themselves to her, sex is frequently the focus of contention and disappointment. In the animal kingdom, species such as beavers and gibbons are strictly monogamous. But whether or not humans were meant to be partnered for life is a subject over which evolutionary psychologists can argue. What seems certain is that we tend to struggle with monogamy over the long haul.

In Crabtree’s experience, monogamy often leads to monotony, affairs are destructive, and polyamory, or an open marriage as it used to be called, rarely suits both partners. That doesn’t leave a whole lot of options.

“The truth is it’s very hard to maintain any kind of romantic relationship,” says Crabtree. “My advice is that if you’ve got the space, don’t sleep in the same bedroom. That preserves mystery and adventure and helps keep sexual interest alive.”

A lack of sexual interest, however, may often be symptomatic of other stress points. Custers identifies four life stages when relationships come under particular pressure.

The first is in the early stages, when working out how to create a relationship. “But that’s often easy to get through,” says Custers, “because love is in the air.”

The arrival of children and division of labour is frequently a troublespot. “Sheer exhaustion and lack of sleep don’t help,” says Custers.

Then when children reach their early teens – not always the most cherished period of parenting – it often coincides with one or both partners reaching the ceiling of their careers. “There is a sense that you can’t get off the ladder,” says Custers. “The career path is no longer invigorating, and there is the mortgage to pay and holidays and all the rest. The breadwinner can feel stuck and under-appreciated.”

Finally, there is the crisis that awaits when children leave home. “If the couple has placed the primary relationship on the children,” says Custers, “when that cornerstone has gone the relationship flounders.”

This last point seems to be particularly relevant in the current climate of heavily prescribed parental engagement. By common consent we are living in a child-focused age. Certainly, when I was a child in the 1960s and 1970s, the word “parenting” was unheard of, and children were largely left to get on with the urgent business of childhood: lying about your whereabouts, furtive smoking and fumbling towards sexual knowledge.

Nowadays there is a great deal more parental involvement, with children being ferried to all social and sporting engagements, and all manner of what were once external explorations being domesticated as far as possible within the family home.

“Parents are often surprised that the primary relationship should be between the couple,” says Custers. “You’re not taking any love away from your children, but the way you construct your family dynamic has to be by putting your relationship first.”

But putting a relationship first is a full-time job when there are so many competing voices for our attention – not least that of our individual selves. We live in an era of self-realisation, in which advertising, culture, consumerism and the quasi-religion of self-help all conspire to create the impression that we as individuals are pretty damned important and could always do with a little more me time.

They say there is no “I” in “team”. That may be true but there is one in “marriage” and there is also one in “divorce”, and the suspicion remains that if the “I” isn’t getting enough action in the first state, it tends to want to migrate to the second.

“We all shift and change,” says Custers, “and when one partner is exposed to things in the world that make them grow in a certain way, and the other partner hasn’t come along on the ride, you can wake up and discover that you are sleeping with a stranger.”

That is precisely what happened to many couples on the morning of 24 June last year. A recent survey by the charity Relate found that a fifth of its relationship support counsellors have had consultations with clients who are in conflict over Brexit.

If it’s not enough to argue over child-rearing, flirting with other people and how to stack a dishwasher, now there is also the deal-breaker of your position on article 50. In many cases, Brexiters have turned out not to want to remain with Remainers and Remainers have sought an exit from Brexiters.

Amid all these pressures and distractions it’s amazing that so many relationships survive, and yet they do. Sixty-six per cent of marriages are still going at their 20th anniversary. Perhaps one of the reasons that this seems a surprisingly high number is that the mirror of popular culture is often distorting, particularly in the case of celebrity marriages, which tend to have a shelf-life only slightly longer than yoghurt.

There are exceptions, such as Snoop Dogg and Shante Taylor or Justin Timberlake and Jessica Biel, partnerships that have lasted in the glare of publicity and tabloid incursions. But both those examples, like most long-term relationships, have survived difficult patches.

One of the reasons that celebrities often don’t make it through those trying times is that they have ready alternatives and the money to realise them. For the rest of us, facing a precipitous decline in material wealth and a prolonged spell of solitary pastimes, there are pragmatic incentives to see through the downtimes.

And failing that, there is always relationship counselling. People now are much more likely to give voice to their difficulties than in previous generations. What often helps, says Custers, is that they come to see that their problems are not unique to them but are simply the ebb and flow that all relationships must confront and, if things are to work out, adapt to.

As Custers puts it: “All of us may have two or three significant relationships in our lives – and often with the same person.”

IN SICKNESS AND IN HEALTH

The average marriage is expected by statisticians to last for 32 years.

Only 16% of marriages reach the 60th wedding anniversary.

More than 75% of people marrying in 2013 were marrying for the first time.

Civil ceremonies accounted for 72% of all marriages in 2013.

We use cookies on our website to give you the most relevant experience by remembering your preferences and repeat visits. By clicking “Accept All”, you consent to the use of ALL the cookies. However, you may visit "Cookie Settings" to provide a controlled consent.
Cookie SettingsAccept All
Manage consent

This website uses cookies to improve your experience while you navigate through the website. Out of these, the cookies that are categorized as necessary are stored on your browser as they are essential for the working of basic functionalities of the website. We also use third-party cookies that help us analyze and understand how you use this website. These cookies will be stored in your browser only with your consent. You also have the option to opt-out of these cookies. But opting out of some of these cookies may affect your browsing experience.
Necessary Always Enabled
Necessary cookies are absolutely essential for the website to function properly. These cookies ensure basic functionalities and security features of the website, anonymously.
Functional
Functional cookies help to perform certain functionalities like sharing the content of the website on social media platforms, collect feedbacks, and other third-party features.
Performance
Performance cookies are used to understand and analyze the key performance indexes of the website which helps in delivering a better user experience for the visitors.
Analytics
Analytical cookies are used to understand how visitors interact with the website. These cookies help provide information on metrics the number of visitors, bounce rate, traffic source, etc.
Advertisement
Advertisement cookies are used to provide visitors with relevant ads and marketing campaigns. These cookies track visitors across websites and collect information to provide customized ads.
Others
Other uncategorized cookies are those that are being analyzed and have not been classified into a category as yet.
SAVE & ACCEPT